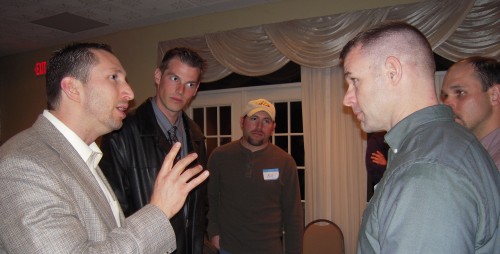 My parents moved out there when I was in College, a big move for them. My younger sisters were all raised there. My parents home in New Jersey served as an escape after we lived downtown during 9/11, a place where we ended up staying for quite some time. My first daughter, was born in Morristown, New Jersey. I remember many nights at the hospital there. In fact, many of my great business experiences happened there as well–where my start-up company did a LOT of business for pharma clients in “pharma corridor.”

So it was fun to go back to a land that I really love a lot, and served as the venue for some of the powerful and transformational memories in my life, for our latest Univera event. You can see a few of the fun clips, from an airport departure to some of the associates on the East Coast, below.

The room was absolutely packed. Overflowing. Biggest event we’ve had in NJ, and it was preceded by a great dinner with some of the local leaders–which I only participated in for a few minutes due to another conflict, but Regan and Stephen had a great time and it was a warm up for the evening. I’m guessing 250 people. And for a MONDAY NIGHT!

Now, I’ve got to admit–and Stephen and Regan would say this as well–but midway through the event we were a little curious as to why it seemed a little stale. Just a little flat. Or maybe more than a little. Kinda flat.

Was it the evening? Monday night? The room? Mic? The presentations?

And I asked Al, he reminded me…It was all the guests. It’s not that they were flat, it’s just that 70% of the room was there for their first time, so many guests. And they were just checking things out, wondering what’s this deal all about? Who are these guys? What do these products do? How does this business work?

So, it just took a while. But they continued to warm up, the enthusiasm brewed throughout the event–particularly after Mike jumped on stage and raised it up a few decibels (he’s the guy in the video). The guy was great, just a nice catalyst to spark the room.

And there’s a saying in this industry: “You can’t say the wrong thing to the right person, or the right thing to the wrong person.” I think there’s some serious truth to that, not absolutely–but often.

Blue Diamonds Al Keranen and John Rogers were there–both did an excellent job. A guy named…gulp…Animal did a really great job hosting the meeting. Yeah, I said Animal. His real name is Glenn, but his nickname…It doesn’t matter. You have to know him, and his upteam Diamond Kenny Rossi who gives nicknames to just about everybody. Also, Diamond Dave Skultety was there…Plus a LOT of great new Univera leaders–Silvers and Golds in particular, great youth and diversity.

The energy was there, it really ratcheted up after the meeting. And just kept going. Post-meeting it must’ve been buzzing for a good hour, at least, with the general group. Then we hung out with the leaders for probably another hour or two after that–was a lot of fun, great people. strong energy. This is an area that is completely coming on the map.

Thanks New Jersey, for adding to the great memories.

No doubts, take Lasix only as prescribed by your doctor. Levitra is one of the best-known medications of all season. What is the most significant information you must study about levitra vs cialis? Most doctors say the effectiveness of Levitra is well documented. Absolutely, a sexual problem refers to a problem during any phase of the sexual response cycle that prevents the individual from experiencing satisfaction from the sexual life. Whilst sex is not vital for good health, it’s doubtless great for anyone. Why it happen? What kinds of professionals treat sexual diseases in men? A common class of antidepressants, which include Zoloft — can kill the mood in bedroom.

5 Replies to “Memories and Mo(mentum)”