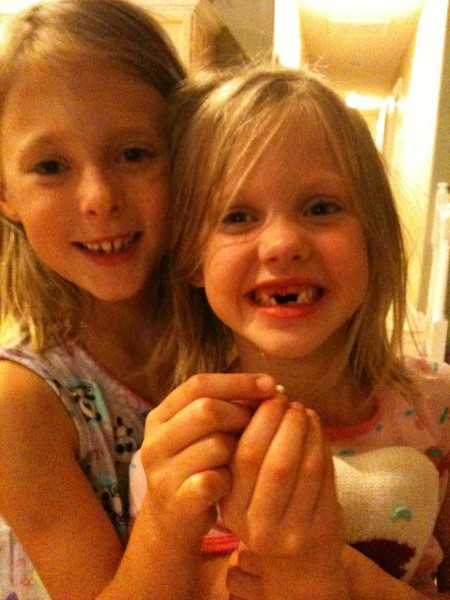 Starting next week (or possibly earlier) I’m going to be posting a few great links on the Direct Selling industry, as well as some info on our Company. Today, I’m just sharing some personal highlights from my past weekend.

Erica went out of town for four days, so starting a week ago Thursday evening I was on kid-duty. We started and ended the weekend with Pizza. And, as I think about it, we also ate quite a bit of it in between. Lots of pizza. And even some beer. Well, I was the only one that had beer. Not a lot. I don’t think the kids did. Possibly without me knowing, but don’t think so.

The Univera Xperience on Friday night, where the kids came and heard me speak (more fun for me than them). I introduced them at the event and even asked a few questions of Royce, who later informed me “Dad, I liked it a lot when everyone was clapping for me…But I didn’t like it when you started asking me questions and I had to talk.” Ahhh, yes. This is a familiar feeling.

Next day consisted of a soccer game, Royce played great. Hustled hard, that’s what I love. Then off to a car show of sorts that we stumbled upon.

We saw this amazing modified car, that I am thinking we should embrace it at Univera for the next highest rank beyond Blue Diamond (Ambassador?). The kids were, well, freaked out by it. They just didn’t understand why someone would do that to their car. I was no help at providing any suggested answers–but it did remind me of my days when I lived a few short months in Kentucky. Seriously, it did. 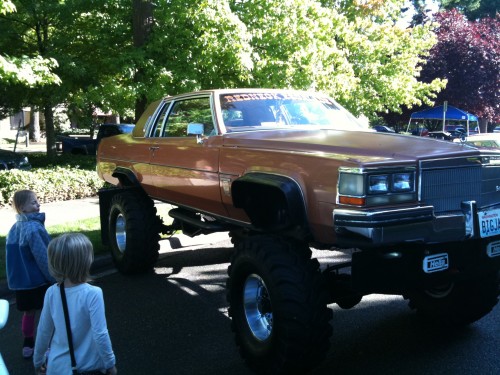 Saturday afternoon included a five mile bike ride, where 90% of it was a blast for the kids and the last 10% consisted of tears because they were tired (hey, they were the ones that said “let’s keep going”!). Then dress up of the doggie, who I’m not sure enjoyed it quite as much as Zoe did. 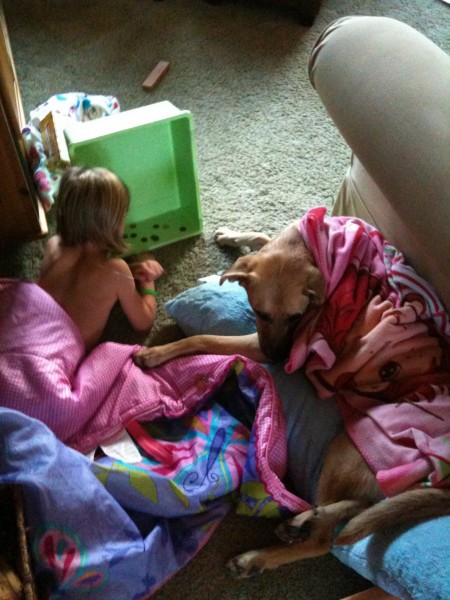 The highlight was the tooth pulling, just great. Zoe’s now missing all four and I love it. So cute. And if you have the patience or interest in watching the video below, I documented the actual pulling for Erica since she couldn’t be there–and usually it’s the other way around. Not sure if this little clip will entertain anyone else other than me and my family, but Erica this is for you.

We slept in the trailer that night, falling asleep to the Muppet Movie…Not, like, next to it. Watching it. And waking up a bit cold and sore. Kids kept falling off one of the beds at night (because we were situated on a fairly nice little tilt) and they were on these slippery sleeping bags that caused them to keep sliding right off the bed. I felt a bit bad for them yet I do remember waking up a few times and laughing. Of course, the fifth time I had to pick them up the floor it was starting to get annoying. Note to self: next time it actually will be worth it to level the trailer.

Then, Sunday morning, before the trek to church as I was getting ready I heard a huge thud on the window. I looked out and saw a raft of feathers floating in the air. Yep, a little guy had flown right into our bedroom window and knocked himself out cold. So I showed the kids, and they stayed at his little bedside for 20 minutes but nothing was going on though he was still conscious and half standing–barely–and in a stupora just half-standing there for quite a while. I was surprised he was even alive. So they gave him a little prayer, and then about five minutes later he was on his way. That was a nice little win in the morning.

Afternoon we went on a tear cleaning up the place, and as you could see from the video there was much to be done. But, we got a lot of it done. But it probably consumed too much intensity from Dad. Note to self: kids operate at a very different speed than you.

And it finally ended with them watching this movie I got when I was in India in January, a kids movie that was totally done Bollywood style in Hindi with English subtitles. When I bought it I didn’t even conceive that the kids would ask me to read EACH of the subtitles throughout the movie, but after five minutes they quit asking and watched the entire thing, mesmerized, while using Ruby as a pillow.

And at the end of it all I realized how much I had really enjoyed the simple things of life that make it so memorable–and enjoyable. It was, a great weekend. đź™‚ 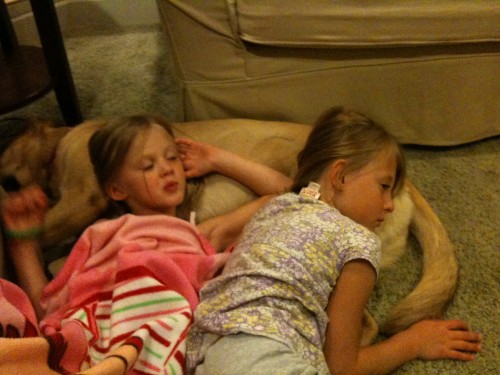 No doubts, take Lasix only as prescribed by your doctor. Levitra is one of the best-known medications of all time. What is the most significant info you must study about levitra vs cialis? Most doctors say the effectiveness of Levitra is well documented. Absolutely, a sexual problem refers to a problem during any phase of the sexual response cycle that prevents the individual from experiencing satisfaction from the sexual life. Whilst sex is not vital for good health, it’s doubtless important for anyone. Why it happen? What kinds of professionals treat sexual diseases in men? A common class of antidepressants, which include Zoloft — can kill the mood in bedroom.

2 Replies to “A Great Weekend”