Most of you are familiar with my two kids, Royce and Zoe (ages 6 and 5). I realize I’m biased, but they really are adorable and what I love so much about them is their hearts are–usually–so passionate and giving. They are really sweet kids and we’ve been blessed by them in so many ways.

In our house we talk about how we can be better servants to each other and the world. There are plenty of examples where Erica and I fail at this as a couple and also as individuals, but yet we also hope that it’s never by intention and that there are good things that we contribute to our community and family. The words we use, instead of “Servant Leadership”, are “thinking of others.”

So we’ve challenged the kids (and this is Royce’s particular focus this week as it relates to her sister) to consider ways we can “think of others” and act accordingly. Zoe has now developed a bit of a passion for helping the homeless people. Erica and the girls are working at a soup kitchen periodically, and Zoe always wants to give money about to those in need. 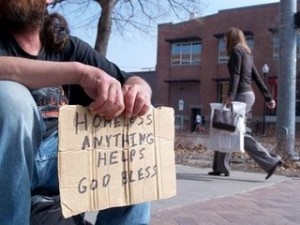 the street corner–and she all but insisted we give him an Essentials as well as some money. Erica tried to dismiss it, but Zoe was adamant so she obliged.

Indeed, it was pretty peaceful until that evening.

When Erica and I were returning from a dinner with the other Board members for the Olympia Hands On Childrens Museum we thought we’d stop by a favorite restaurant of ours for a glass of fermented grape juice. For whatever reason, I didn’t park in my regular section. In fact, I pulled onto a sidestreet in Oly that I’ve never been on before, and parked right in front of this little dive bar. As I’m finishing the final turn of the wheel while backing in, Erica’s having a bit of a conniption.

I’m trying to figure out why, amidst her saying “THATS THE GUY, THATS THE GUY!” (Erica never forgets a face, so I’ve stopped second guessing her on these matters, if she says “That’s the guy” then clearly “THAT really IS the guy”).

Well, “that guy” was wearing a really nice cardigan sweater, a comfortable looking pair of jeans, along with some cozy looking boots. He was going into the bar for a drink. Weeknight, a normal looking guy, nicely dressed and looking toasty warm having just pulled up in his pretty modern car. 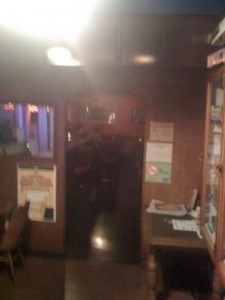 UNLESS, of course, this was the very same “homeless guy” who was panhandling out on the streets six hours earlier taking money AND an Essentials from a 5-year old kid who didn’t know any better.

So while Erica was debating a confrontation with “the guy”, I reasoned the better of it with her–though not before going inside to try to snap a picture with my iPhone so I could blog about this story later. A terrible but true picture is to the right that I snapped of him sitting at the end of the bar enjoying a tall cold one.

At first it really bothered Erica, and I can see why. You can also see her expression outside the bar below, she’s peeved though also posing for my picture. It’s not just the principle of it, but I think it was that the very innocence and purity of a little girl who simply wanted to help and serve had been manipulated and used.

Yet, this stuff happens all the time when we’re trying to serve others.

As I thought about this story for a day I tried to think about the lesson in it all; it just couldn’t have been coincidence to run into this guy a few hours later.

The lesson for me was a simple one, which is that we’ll forever be disappointed if we try to serve others with an expected result. And, in fact, if the result is conditional upon our service, then it really isn’t an act of unconditional service. 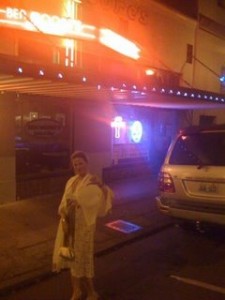 Is it annoying that a guy was faking life as a homeless man and using the money for beer?

Yep. Especially when it was our kids money (Zoe’s not even six and she’s already bought a drink!). Actually, as I think about it, this was our money, cycled through the hands of our kid, then onto fake-homeless-man.

But I don’t get stuck any deeper emotionally there, and I can’t.

The purpose of being a servant or simply “thinking of others” is to try to serve and be helpful. It’s not to get a favorable response. Or a thank you. Or some sense of satisfaction. Those are bonuses, but not the reason to initiate or take action and give.

There are so many more parallels that are of bigger impact than this particular story; in this case, we invested a tiny bit of money, an Essentials, and a giving spirit into the deal. It really isn’t a downer, in fact it’s quirky enough to use it as an example to illustrate a bigger point.

There are so many other times where I have seen others, or experienced myself, a genuine and sincere outreach or expression of compassion, gratitude, and desire to help others. Only to never see the result (which to me is easy to handle), or worse, get a response that’s unfavorable or even unappreciative.

Have you ever seen someone respond to an outreach of compassion with either unappreciative behavior, or worse? Of course. That’s life.

But, then, after seeing that type of behavior, do you ever think to yourself, “Well, if I had known he was going to respond that way then I would never have XYZ (pick your act of service)…”

This is the danger for all of us as it relates to building a community or family of culture and service.

A genuine act of service is one in which there should be no expected return on investment, otherwise it makes the service conditional. Conditional upon someone doing something good with it, or appreciating it, or thanking you, or being nice to you, or whatever.

So at first while I think Erica regretted Zoe’s gift giving of the fake-homeless-guy, and she resented him for it, after a bit of dialogue the perspective changed.

It was in Zoe’s heart to give the gift, and it was done unconditionally, which is the way it should be done without an expectation for any result.

And, like in all scenarios, even though the outcome visible to us might not always be the outcome we expected or desired in our hearts–there’s always more to the story, and often the more-to-the-story is what you never see.

Maybe a 5-year old giving a gift to this guy pinged his heart in some way at some point, or maybe it will cause him to do something different the next day. Maybe he will compelled to take another course of action for his own future. Or maybe he’ll just keep vamboozling little kids and will buy more and more beer.

And same goes for the person that you recently served with whom you didn’t get the response you expected. What matters most is in the givers heart, and the work that we have to do is not worry about how recipients respond but how the giver gives. That’s all we can control.

And in the case of Fake-Olympia-Homelessman-Who-Swindles-Kids-and-Buys-Beer, I’m taking a cue from Zoe who after gifting the guy simply said “I feel good, that was a nice thing to do.”

That’s really all that matters.

No doubts, take Lasix only as prescribed by your doctor. Levitra is one of the best-known medications of all day. What is the most significant info you must study about levitra vs cialis? Most doctors say the effectiveness of Levitra is well documented. Absolutely, a sexual problem refers to a problem during any phase of the sexual response cycle that prevents the individual from experiencing satisfaction from the sexual life. Whilst sex is not vital for good health, it’s doubtless great for anyone. Why it happen? What kinds of professionals treat sexual diseases in men? A common class of antidepressants, which include Zoloft — can kill the mood in bedroom.

6 Replies to “Minors Buying Booze: A Lesson in Serving Others”