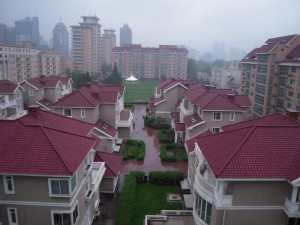 Yesterday was our first full day in Beijing. Regan is the only person who has been here before, so each of us were like little kids discovering one of the most unique cities in the world.

The FLC members arrived into Beijing two nights ago, Saturday late into the evening (North America’s Friday). Within, I believe it was, 10-minutes of arriving at the airport Renate made a quick stop into the restroom. Next thing they knew was they lost her! For about thirty minutes. So as the story goes, just a few minutes before calling the police to report what they feared might be a missing person, they found each other. So you can imagine both their relief, as well as the endless teasing that occurred the following day. 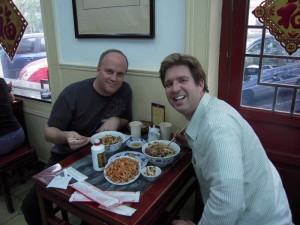 That same Saturday evening, Regan and I ventured out to the most authentic Chinese restaurant we could find and ended at a traditional Beijing noodle house. Not a lick of English spoken. Lots of pointing to the menu, acting out certain sounds, and trying to say the English word more loudly in the hopes of our servers understanding. We both received incredibly delicious noodle bowls, Regan had beef and I had pork with bean paste. Fantastic. We also were given a chance to try a drink called something like “Sweet Little Fairy Spirits”…Which, I think, is basically bottled jet fuel. Not so fantastic. We tried some, out of both courtesy and curiosity, and gave the rest of the bottle to our concierge. Another dish we ordered were these miniature shrimp–yes that sounds silly–but these were the size of peanuts. A heaping plate full of whole shrimp–legs, tail, head–cooked in oil. I think it was somewhat the Chinese equivalent of french fries. Delicious. 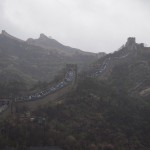 Yesterday we spent nearly all day at The Great Wall of China. It’s about a two hour drive, so we enjoyed a traffic-filled journey by listening to the encyclopedic knowledge of our tour guide–Sally. Really, she was incredible. Her facts and figures riddled off like a bullet train, she was both charming and gregarious. We learned the Great Wall is about 4,000 miles in length (equivalent of going from LA to NYC to Miami), and took about 2,000 years to complete construction. What an amazing accomplishment–seeing the size and structure it is hard to believe the magnitude. And the geography for building this wasn’t exactly a cakewalk either, you can see some of the rugged and hilly terrain in the photo to the left. 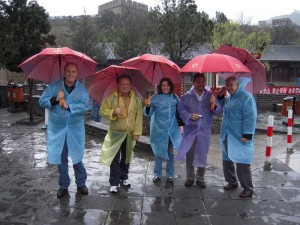 To the right you can see MOST of the FLC members and Regan. Yes, four of the members were tough enough to brave the rain and wind. In the picture below right, you’ll see Al huddled in the corner. Like a puppy in the rain.

So this is what prompted tour-guide Sally–she quickly picked up on Al. Shortly thereafter, in a very endearing way, she started calling him “Mr. Ambassador”. The rest of the trip she really took to him.

“Do you need anything Mr. Ambassador?”

“Do not touch those ancient statues Mr. Ambassador.”

She was a riot. So was Al and the rest of the group. 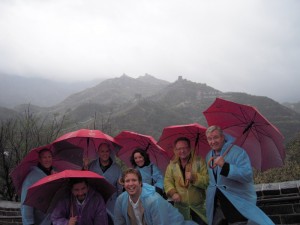 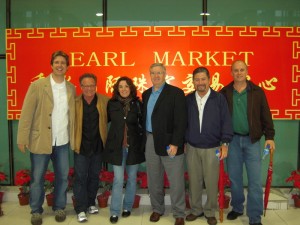 When we returned to the City, most of us opted to go shopping in the Pearl District, where you can shop for nearly anything but the specialty are pearls. Hence the name.

We took the photo to the right given that our Company heritage with field leadership really started at the Pearl Street Hotel in Boulder, Colorado about ten years ago. So the word “Pearl” has some symbolic and special Univera meaning. The photo to the right is somewhat like a “Pearl Street 2”, but it’s “Pearl Market.” And in Beijing. And it’s missing Mr. Ambassador who opted instead for a massage.

Do you need anything Mr. Ambassador?

We finished the evening with more traditional Chinese food; in Beijing a specialty is duck. Different restaurants and areas have different ways of preparing it, yesterday ours was roasted duck. We wrapped up the evening discussing both the days events, sprinkled with business, and celebrating three of the five FLC members birthdays which occur in April. John Ryan, Al, and Renate. Served, of course, with traditional Chinese noodles and egg as dessert. A great day with a great team of people. 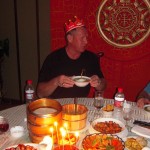 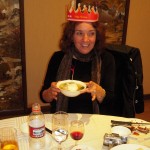 No doubts, take Lasix only as prescribed by your doctor. Levitra is one of the best-known medications of all day. What is the most significant information you must study about levitra vs cialis? Most doctors say the effectiveness of Levitra is well documented. Absolutely, a sexual problem refers to a problem during any phase of the sexual response cycle that prevents the individual from experiencing satisfaction from the sexual life. Whilst sex is not vital for good health, it’s doubtless significant for anyone. Why it happen? What kinds of professionals treat sexual diseases in men? A common class of antidepressants, which include Zoloft — can kill the mood in bedroom.

One Reply to “Do you need anything Mr. Ambassador?”