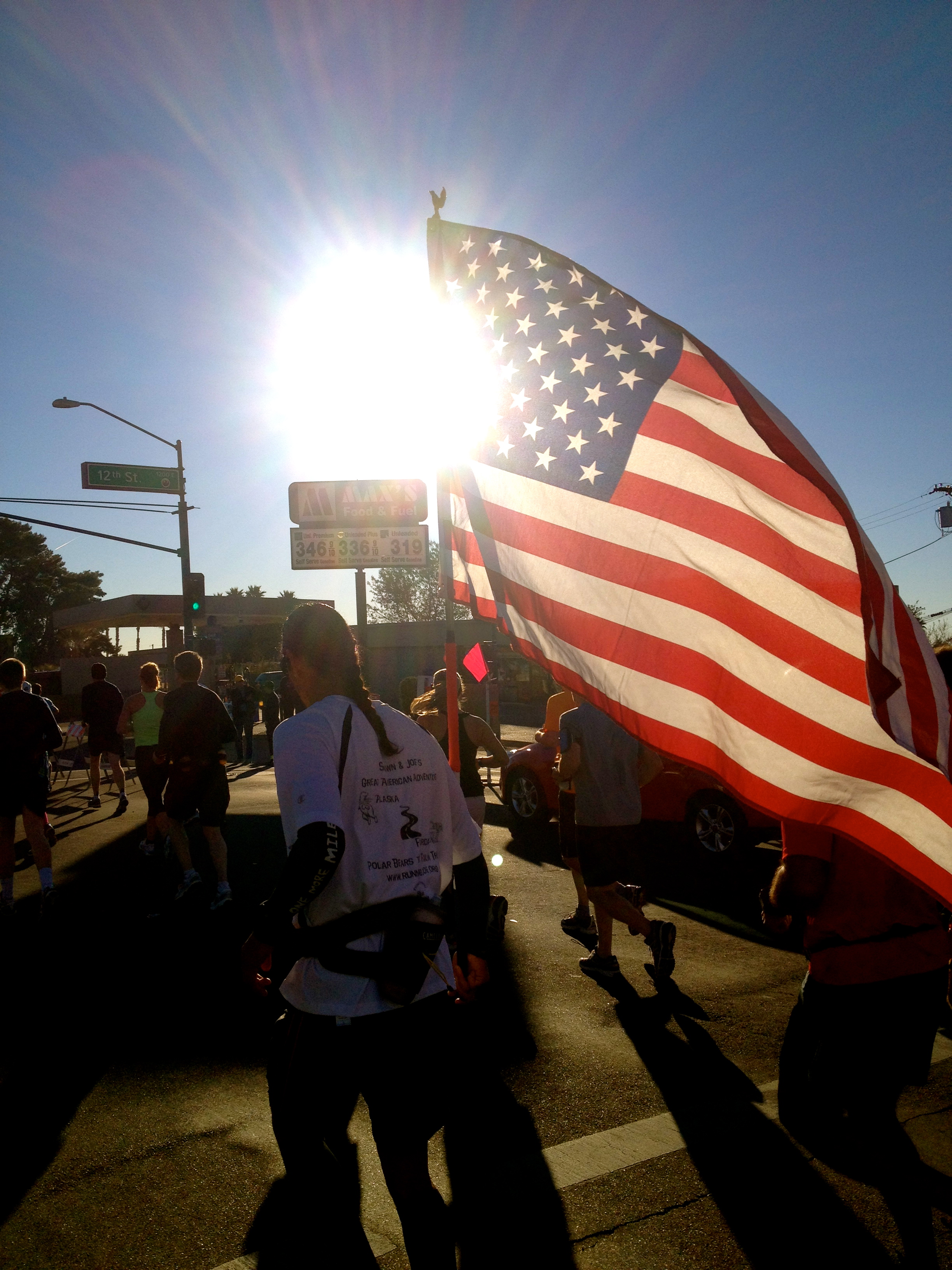 The final leg of my road trip, part one is here, part two is here, and following is part three.

If you are reading this far Þ , I’d suggest listening to this song, the Long Road Home by Mickey Newbury. Maybe as you read this. Or not. It’s a great song. In iTunes you can see how many times you have played a certain song, and I can’t even bring myself to say how many times I have listened to a good dozen songs in my “most played.” It also probably serves as more accurate confirmation of a DSM-IV diagnosis of a bit of an obsessive/compulsive personality. The Long Road Home got some good play time on my road trip. It’s mesmerizing.

I left Tucson on Saturday morning to head over to Phoenix for the Rock ‘n Roll Marathon. Checking into marathons is a great feeling, there is a type of impending human kinetic energy. Can’t quite explain it. Closest I have felt to it is when I used to work as an Exec at a Company where we’d have big events, sometimes thousands of people, at annual conventions. I think it’s the feeling of pulling together enthusiastic people who share a passion. You can feel it. One thing I hate is apathy. Being around passionless people exhausts and annoys me to no end. It’s part of why I love NYC so much. For better or worse, there is a ton of passion there. So I’m drawn to people who are passionate.

I was hanging out at the pool in the afternoon the day before the race finishing the Steve Jobs biography and trying to stay off my legs and save up my energy. I met this guy there whose wife was a professional competitor, and she was running in the half the following day. Super nice guy, 50’s, could tell he was really hard working and at one point in the conversation he told me: “I’m not gaining on the world, but the world isn’t gaining on me either–so I think I’m doing okay.”

And it made me think of the last three gas station attendants on my trip up to that point, Nick, Walter, and Bao. And it’s funny that I remember their names, because I’m not great at names. I talked to Nick from Chevron for a bit, and learned he’s worked two 40-hour a week jobs for the last 12 years. His other gig is at a grocery store. Respectable. Hard work. Good man. I have a soft spot for the “working class” (a term I don’t love but it’s the most descriptive).

However, you clean houses or offices for a living? You have my respect.

Because, THAT is a hard job. An honorable job. And the people in those jobs, well, they’re the ones that are the fabric of America, and what makes it great. It’s not that I have a rant against people who have been successful with big fancy titles, I don’t. But them being successful doesn’t make them any more respectable than a person in a more typical American job.

Seeing the States was a reminder why I have come to be so frustrated with politics, mostly the politicians themselves. Because, most of them forgot who and what makes this country so amazing. I’m doing my best not to editorialize, but during my trip I was really reminded of the people who truly make America what it is. There are days I’m convinced we’d be better off if we simply replaced all of Congress with 535 rational, hardworking middle class Americans who care deeply about this country.

Anyways, back to the road trip…Sunday morning I awoke around 4:30am, excited and nervous. Ready to try hard, but I gave myself an out to bail if I felt horrible during the run. Race gun sounded at 7:50am, and we were off.

During the run I had two particularly memorable moments. The first one was an unknown-to-me person by the name of Jackie, and either there were a ton of women named Jackie running this race, or one REALLY popular one. This guy holding this sign I must’ve seen seven times during my run, and I saw a lot of other Jackie signs on the way. It made me feel good for two reasons, one is to watch a team of people so enthusiastic cheering someone on was simply fun to see. The other good feeling was because I saw all the people standing with the signs waiting for her, therefore, I was clearly running ahead of whoever-this-Jackie-woman was. I try to take the small victories along the way. Þ

The other great moment was running next to this guy for the first ten miles who was carrying the American flag. Seeing the sun streaking through the flag, with him running intently, gave me goosebumps, which I don’t get often. It was one of the best moments of the marathon, perhaps even better than finishing.We live in such an amazing country. Post race I saw him and thanked him for running with the flag, but what I really wanted to do was hug it out with him. Can’t explain how cool it was, I have chills even as I write this. It was magic.

From what I have read, what usually happens with newbie marathoners is first 10 miles are cake, 11-18 are fine, then somewhere around 18-20 you hit the wall and then, well, welcome to hell. ô That was pretty much my experience in my first marathon six weeks ago.

What happened in the Phoenix marathon was unexpected. I had the stomach flu then followed by either a wicked cold or the regular flu (there should be some law of physiology that the two can’t accompany each other) starting a week before the race. So the first 15 miles I felt pretty lousy. Then, at mile 15, something happened. It just clicked. And I felt great. My pace picked up considerably. And it lasted until I got to mile 23.5, where I finally bonk’d (hit the wall) but when you bonk that far along it’s a lot easier to complete. My time was 3:55:24, so I was thrilled to finish this one given how I’d been feeling, getting sub-four was just a bonus.

Post run, I went and saw a few friends from my high school back in Columbus, Ohio. Great people. I loved hearing their stories, experiences, and travels from over the years. I never tire of meeting, and listening to interesting people. Mike and Julie, hope to see you guys again on another Arizona trip…

And after a few hours of chatting over burgers, truffle fries, and (one) beer–my big cheat meal for the week–I was off to hit the road to continue my trek on I-10 west into the sunset. And back into California, 3,500 miles later.

Why’d I drive from Florida to California? Because I have a car affliction.

But, what prompted my car buying affliction in Florida was, in part, the prospect of driving across the Country. Because I knew that during my trip I’d learn a little bit more about myself. A lot more about others. A few great life lessons along the way.

And, that I’d fall in love with America all over again.

No doubts, take Lasix only as prescribed by your doctor. Levitra is one of the best-known medications of all when. What is the most significant data you must study about levitra vs cialis? Most doctors say the effectiveness of Levitra is well documented. Absolutely, a sexual problem refers to a problem during any phase of the sexual response cycle that prevents the individual from experiencing satisfaction from the sexual life. Whilst sex is not vital for good soundness, its doubtless important for anyone. Why it happen? What kinds of professionals treat sexual diseases in men? A common class of antidepressants, which include Zoloft  can kill the mood in bedroom.