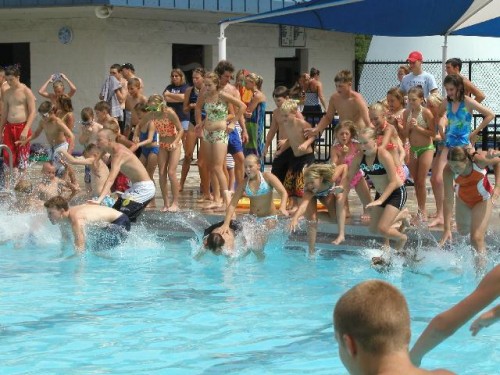 Today I spent the day thinking about…

Not entirely, but the fact of the matter is I spent a bit of time thinking about my life, what I wanted to achieve, where I wanted to go, the impact I felt like I could have, and other such matters. Which, I thought was pretty important stuff.

It all came to a crashing halt this evening. We were at the pool, and there was this little girl there. Royce and Zoe had totally adopted her and were playing with her like a newfound sister. She looked like she was four years old, a tiny kid. Very sweet. The girls loved her.

And that wouldn’t get much bigger for the rest of her life due to a genetic issue. Some of the chromosomes didn’t just work out the right way for her, yet they worked out fine for me…and probably most of you as well.

Today I wanted to write, and I had a lot of things I was going to blog about. Vision. Passion. Persistence. Purpose. Energy. Somedays not a lot comes to my mind. Today was one of those days where the opposite occurs, I could’ve written for hours.

And then it hit me, so hard, instantaneously and in less then 30-seconds. It was like a wave of emotions and it lead to what was both a rapid and reflective moment; I’m not sure there was an epiphany, but rather just a moment in time that reminded me about how fortunate I am. Really, I don’t even know why I’m blogging about it. But after five minutes at the pool, I just looked at Erica and told her it was time for me to go and write.

It’s not that this little girl isn’t fortunate as well, in her own way. And yet I realized in seeing her situation all the breaks I’ve been given. The access, the shots, the opportunities. Some of it I’ve had to work for, and really hard. There was/is a price to pay. I don’t feel like stuff just falls in my lap.

But then the reality is, that other pieces had a lot to do with the right time, right place. Or, perhaps, I just had the right look. Degree. Background. Experience. Mentor. Team. Whatever.

Maybe things fell more into my lap than I realize, or care to admit. If I were born in Kolkata, India, I’m quite certain I wouldn’t be here doing this. Or at a pool tonight. And writing a blog. Chances are I’d be on the streets fighting for scraps.

So then there are those other people…that inspire me, despite circumstances whether it’s due to something I can’t relate to–where they were born, the family to whom they were born into, a genetic mutation from which there is no simple or future solution.

And I get reflective, and inspired.

I get inspired by the people who made it happen who didn’t have a lot, it wasn’t given to them. To me, the story of Chris Gardner is inspirational. The story of Jack Welch is not. It’s not that Welch wasn’t really good. He was. And it’s not that he didn’t work hard. He did. But, the truth of the matter is, to a degree, the deck was lined up for him. Surely, for a good number of people it is and they STILL don’t activate their potential (Welch certainly pushed his potential to the max). And that’s too bad. But for a lot of people who are successful, well, there were also circumstances that really helped drive it (read Outliers by Malcom Gladwel if you think otherwise).

Yet, then there’s guys like Chris Gardner. Who still had some breaks, but man a lot fewer than the rest of us. Or kids who are ten, and getting older, that live in the body of a four year old whose physical dimensions will change remarkably little over the next decade.

And that stuff just hits me. It’s about the odds, possibly. Not just that I like the underdog story, but that I’m humbled and inspired by it. It makes me realize how much I have, and perhaps at times how little I really do to maximize it–or appreciate it.

Today, I started with thinking about me. And through an exceptionally odd moment, a small point in time that I wasn’t even looking for, barely aware of at first, it led me to just a moment of reflection.

For the gifts that I’ve been given, but beyond that, for the inspiration that others provide me, through what it is that they can and will accomplish, in spite of circumstances that might be much more challenging than those of which for which I have had to manage.

Which is why I love this quote from Teddy Roosevelt:

“Do what you can, with what you have, where you are.”

No doubts, take Lasix only as prescribed by your doctor. Levitra is one of the best-known medications of all day. What is the most significant data you must study about levitra vs cialis? Most doctors say the effectiveness of Levitra is well documented. Absolutely, a sexual problem refers to a problem during any phase of the sexual response cycle that prevents the individual from experiencing satisfaction from the sexual life. Whilst sex is not vital for good health, it’s doubtless important for anyone. Why it happen? What kinds of professionals treat sexual diseases in men? A common class of antidepressants, which include Zoloft — can kill the mood in bedroom.

6 Replies to “A Moment of Reflection”