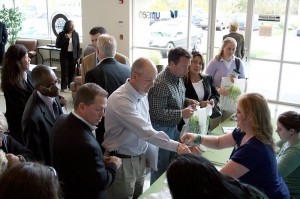 Today marked the official start of our Road Tour across North America at the Corporate offices right here in Lacey, Washington at our monthly Univera Xperience. It was the first day Regan and I were back in the office for two weeks, and the last three days have been pretty sleep deprived so it was a little foggy–but fun nonetheless.

Amazing how much it is that you can really miss the people (and family, of course!) that you work with, both in the field and corporately, when gone for an extended period of time.

Today’s event was filled with some good energy; because of the number of attendees we had to run two different groups–it probably sapped a bit of the buzz/energy in the room (always better to have a packed house), but it also afforded a more comfortable setting and I’m sure better logistics.

Stephen, pictured left, as always, was charming, funny, informative, and compelling. I was in and out of the Xperience but caught a few really good sections of his presentation. He really is one of the most gifted speakers I know, and he’s also an excellent biochemist.

This afternoon we played a bit of a practical joke on Dave Nash, Director of Canada Sales. It’s been planned for weeks. It started a few months ago when we were on the Canadian Road Tour which began in Vancouver, BC (where there is an exceptional Univera team of Associates, by the way). Nash opened the program with this story of “The Great Blondin.” It’s the story about a guy who apparently is the greatest tightrope walker in the history of the sport of tightrope walking. This is not a very well known story, or sport for that matter and I would expect for good reason. đź™‚

Anyways, I’ll spare you the details and make a long story short. This Blondin guy is a daredevil, and one day at the pinnacle of his career he challenges a fan who believes Blondin is the best of the best to get into the wheelbarrow and cross the tightrope with him as a passenger. Sounds fun, no? 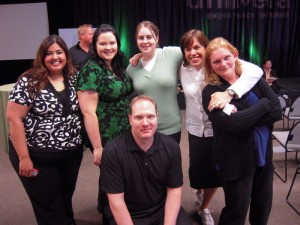 So while on the Canada tour Nash opens with this story; as he’s telling the story Stephen and I are cringing, partly because the symbolism of the story is one of danger of life, wild risk taking, madman antics, etc. (which is quite the opposite experience of Univera) but, the point he was making is that there does require a leap of faith in any venture. So at the end of the presentation we’re all debriefing about what went well, what we could improve…and Stephen and I basically say “Nash, we really admire the attempt at the analogy, and pretty good delivery, but do you really think this Blondin story conveys the right message? I mean, Blondin is a daredevil, crossing a tightrope with a wheelbarrow, asking people to get in the wheelbarrow…”

But as the tour continued, so did Nash with the Blondin story. I must admit, he got pretty good at telling the story effectively and making the “leap of faith” point while minimizing the inherent dangers, not to mention insanity, of sitting in a wheelbarrow on top of a tightrope. 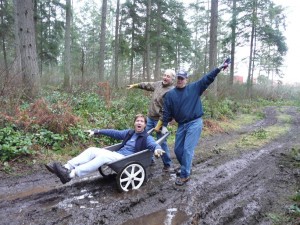 A month after the Canadian tour, about ten Univera employees participated together in a volunteer activity cleaning up some land owned by the Company. We decided to take a picture of me in the wheelbarrow being driven by Stephen and Regan. Around the same time, we thought to have Nash open the next Xperience with “The Great Blondin” story and that we would insert, unknownly to him, the photo of us and the wheelbarrow right at the punchline of his analogy.

So, three weeks later here we are today at the Univera Xperience and I explained to Nash that Regan really wants him to open the event with “The Great Blondin” anecdote. It doesn’t take much to convince him to do it. So, today, on two occasions, he told the story. But the first time he was quite surprised, because at the punchline (“get in the wheelbarrow”) we actually replaced his regular powerpoint slide with the photo taken of me in the wheelbarrow being driven by Regan and Stephen, pictured right.

Surprised would be an understatement, you can see the blurred reaction to left It took him a minute to realize what we’d done, which was followed with some barely controllable laughter. A few photos exist of his reaction (see left), but he’s moving around in such hysterics that the camera couldn’t quite keep up. Dave did a great job with the analogy, and was also a great sport in the process. 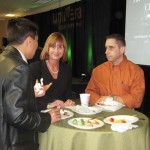 The biggest thrill for me at these events are meeting the people afterwards who are involved in the business, or at least are considering it. I met one individual who first attended an event in Portland a few months ago. She got signed up right after that weekend and is having a blast. Of course, sometimes the best benefit to these events is recharging the batteries as well. No matter how great any organization/team/event, there will be times where people need to get re-energized. It’s just how it works. So these Xperience Events serve, hopefully, as a way to connect both those who are existing and new with some excitement and energy to move forward. I know that this is what it does for me, particularly in seeing, meeting, and greeting our field. 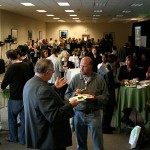 Monday night we’re in Seattle, then we travel down the coast ending in Phoenix this weekend. Looking forward to seeing each of you as we go across the Country in the coming month.

And, if curiosity has captured you, find out more info on “The Great Blondin” by clicking here.

No doubts, take Lasix only as prescribed by your doctor. Levitra is one of the best-known medications of all period. What is the most significant information you must study about levitra vs cialis? Most doctors say the effectiveness of Levitra is well documented. Absolutely, a sexual problem refers to a problem during any phase of the sexual response cycle that prevents the individual from experiencing satisfaction from the sexual life. Whilst sex is not vital for good health, it’s doubtless important for anyone. Why it happen? What kinds of professionals treat sexual diseases in men? A common class of antidepressants, which include Zoloft — can kill the mood in bedroom.

3 Replies to “The Great Blondin”