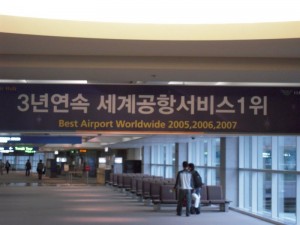 This week I arrived in Seoul, Korea, to participate in a few of the ECONET Worldwide Executive meetings hosted by Bill Lee and the other Board members as well as some team building activities.

Coming into it, I felt I knew a lot about the resources, the plans, the people, the vision. But, leaving, I am even more amazed by what I learned and saw. Our owner, Bill Lee, has tremendous vision for the Company. But, more than this, he has commitment. 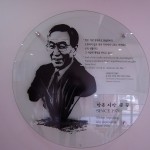 Vision can come and go, same with great ideas. But vision coupled with commitment can be magical. And it doesn’t exist in many places, that I do know. The words from the late Chairman Lee embedded in this placard hanging in the lobby of ECONET Center in Seoul are a good example of what I mean.

After a 14-hour flight from Seattle to Seoul, I arrived with the completed task of an empty inbox (amazing how many emails you can get through without interruptions!) and about a dozen outdated Wall Street Journals finally read.

Immediately, I jumped right into Korean culture, by going to a traditional Korean restaurant where I was served an array of small dishes that you can see in the picture to the left. What is it? Not sure. But I ate all of it. Well, almost all of it. And it was really quite good though I’m not sure I could adjust to this daily.

On Sunday morning, we went to Bill’s family farm about an hour outside of Seoul, to participate in various team-building activities and to “experience Korean culture” along with other ECONET Exec’s. Seoul is a crowded and sprawling city, reminding me of my days from living in Manhattan with the activity, crowds, and energy (without quite the number of skyscrapers) yet with the vast sprawl you see in Atlanta. Nearly 25 million people cram into what’s really a pretty small area of land.

Seoul is an amazing city. Great energy. Continual innovation. Respect and courtesy. Tenacity. I am always impressed, and humbled, by the people of Korea when I travel here. 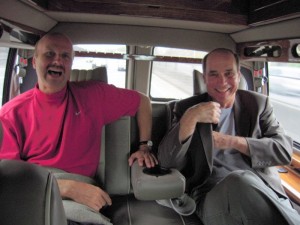 Leaving early the next morning, much of the entertainment was the drive to and from, where a van brought one of the groups over to Bill’s home. In the picture to the right you can see Peter Hafermann, CEO of Aloecorp, and Ed Cannon, CEO of Unigen. Both great executives, and as you can tell by the looks on their faces, are a lot of fun–this is a snapshot in between friendly jokes and ribbing we’re giving each other on the drive over.

Bill’s house in the country, simply known as “the Farm”, is gorgeous. Laden–as you would expect–with trees and plantings of all types over many acres, nestled among some rolling hills. A kind of special serenity exists there, and it was an idyllic location for fellowship with peers from across the world. 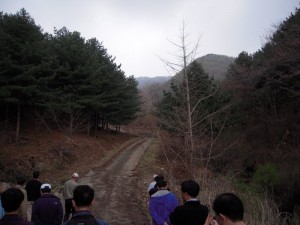 During the course of the day we participated in Korean games and various cultural events, which included learning how to play the Korean drums (I was so remedial that I received my own instructor!) . One of the games is pictured to the below right; it’s a very traditional Korean game, and something we never really figured out even after several explanations from different people. 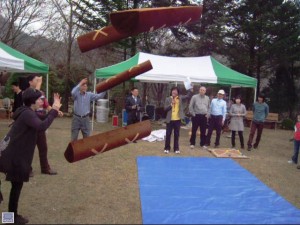 It works like this: four people take turns throwing foam logs onto a pad and hope that either an X or an O lands on top. That team then receives a certain number of points for doing so. And you don’t want one or four points, that’s bad. But two or three is good.. I think. At least that’s when the Koreans seemed to cheer loudest. Like I said, we never understood it. A total game of chance, but it drew out the hyper-competitiveness in all of us. Despite having no clue what we were doing, the game “throwing-foam-logs-onto-a-mat-hoping-a-certain symbol turns-straight-up-so-we-can-win” proved to be amazingly fun.

The first day of “culture” was a great kick off to excellent meetings that discussed some exciting progress across ECONET, from the enrollment growth of Univera associates to the manufacturing facility in Lyford, Texas, to the new wellness spa/resort–officially named “VeraResort”, which is already in the beginning phases of construction. There’s much more, stories and photos of which I am sure we’ll share on our tour across North America in April and May.

No doubts, take Lasix only as prescribed by your doctor. Levitra is one of the best-known medications of all when. What is the most significant info you must study about levitra vs cialis? Most doctors say the effectiveness of Levitra is well documented. Absolutely, a sexual problem refers to a problem during any phase of the sexual response cycle that prevents the individual from experiencing satisfaction from the sexual life. Whilst sex is not vital for good health, it’s doubtless significant for anyone. Why it happen? What kinds of professionals treat sexual diseases in men? A common class of antidepressants, which include Zoloft — can kill the mood in bedroom.