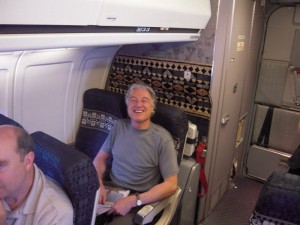 This morning we awoke at an early hour after a late-into-the-evening night at a steakhouse (this was at Stephen’s suggestion, I was trying to find Sushi! But, for sure, he did eat fish for dinner), to jump on a 7:30am flight from Seattle to Sacramento to catch a luncheon.

Stephen insisted, endearingly, that he visit a Anthony’s at the Airport to dine on a delicious “Seattle Scramble” breakfast. Evidently, it opens right at 6am so we left a little on the early side. Despite the fact we had just finished eating hours before. For a guy who has 9% bodyfat, or whatever it is, he sure has a healthy appetite. But I must also admit he’s pretty good about what he eats though he indulges occasionally.

Ultimately, the breakfast joint was at a different terminal so we didn’t make it. Regardless, I was able to envision a highly recommended Cherniske “Seattle Scramble” of fresh farm-raised eggs from chickens-who-do-yoga-daily mixed with all sorts of delicious fillings, like barley, wheat germ, sprouts, spelt (what, really, is spelt beyond just a hexaloid species of wheat? Do we really know?), wheatgrass…you get the idea.

Truth be told, I actually think it was more along the lines of scrambled eggs with smoked salmon and cream cheese, but we’ll never know for sure and I like my guess better.

Upon boarding we learned of flight delays due to a radio that seemingly got fixed three different times. Ultimately our flight was canceled but, fortunately, we caught a departure that left 90-minutes later. 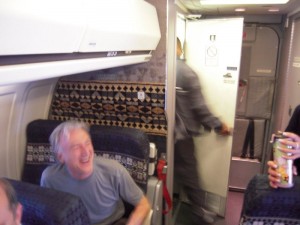 Regardless of the time of flight or how full the aircraft it always seems that Stephen is sitting in the very back of the plane. Dead last seat. Right by the bathroom. I love it. To the right you can see the fruit of my labor from encouraging as many passengers to use the bathroom as possible, and Stephen’s taking it all in stride with fits of laughter. Indeed, it adds a disturbing level of humor to our day and gives me a chance to take a multitude of photos on our flight.

Regan and I usually are in the front (not first class, just further up in coach and if we’re really lucky in the emergency exit) and so we’ve taken to giving him some serious teasing about this repetitive situation. 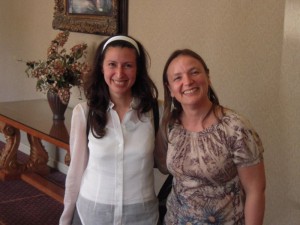 Two Associates, Katie and Nora, were also on our plane having also attended the Bellevue meeting the night before and were continuing the tour in Sacramento and Emeryville. Wow, committed and going strong with guests at each event! You can see their picture to the right, they were an absolute blast to have on a part of our journey. Great people, very sweet and endearing.

Upon touching down in Sacramento we divided and conquered. Or tried to conquer. At least some of us conquered. đź™‚

I took the point on acquiring food (full disclosure: I did go to Starbucks, but no coffee was consumed in the process), Stephen went to get the rental car to pull it around, and Regan…Yes, well, Regan, his job was to get our bags. That was his only job. Get the bags. Yes, all of them. Including mine. BOTH of mine.

So we jump into the car, as I’m throwing it into gear I holler back “Hey Regan, you got all the bags, right?”

Did I mention his only job was to get all the bags? More on this later. 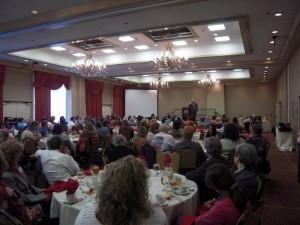 The luncheon had nearly 200 attendees, we arrived about 50-minutes late to a remaining and very patient audience. It was a VERY energetic crowd, especially for a luncheon during the day. This was my first time in Sacramento and the three of us were thrilled with the turnout. 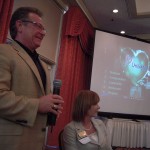 John Ryan moderated and Al wrapped things up, it was very well done. And, 30 Convention tickets were sold to boot! Post-event, there was quite a bit of mingling and it was really invigorating to meet some of the newer Associates. After the lunch we spent a few minutes on our walk out with a new Associate named Glenn (aka “Big Daddy”) and his team; Glenn just started April 1st under Kenny R–you can see the photo of some members of his team as well as Regan and Stephen above left, Kenny and others on his team is pictured above right. FUN and successful people. 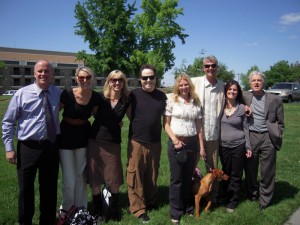 In fact, Big Daddy and his wife, Reagan, contributed an amazing testimonial to the event tonight in Emeryville. He commented on the excitement of seeing so many of his downteam winning so quickly, when at other endeavors it never really happened for them even after years of hard work. And, Reagan, (again, Big Daddy’s wife, not the CEO Regan) really shared from her heart the meaning of the vision and mission of Univera and what they desire to contribute in a purposeful way. 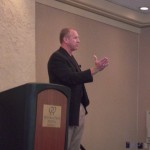 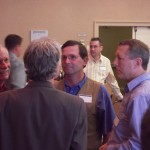 The evening session in Sacramento went well, beyond the highlight just mentioned there were some great people and a good sized group for an emerging market–probably over 150 in attendance. Dwayne hosted the meeting and facilitated throughout, he’s extremely articulate and charismatic. Each of the Exec’s probably spoke a little too long, we should’ve cut it down a bit. Next time. And Al wrapped up the event; he was as good as I’ve seen. Very purposeful in his comments, yet hilarious. Inspirational yet authentic and real. Politically correct yet politically incorrect. Classic Al, he really did a phenomenal job lifting up each of us. It was a really good close to a really good day.

As always, we enjoyed the time both before and after the event the most. Lots of laughter, stories, and fellowship. 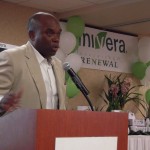 As I’m writing this I’ve developed a bit of an adrenaline rush, hearing the stories of success and enthusiasm are so invigorating. And to see people winning the way they are is addictive. These team events give the opportunity to draw on the positive results of others, with the right intention and spirit coming into the meeting it can really lift people up. I came into the tour feeling really good, but some of these moments cause an instantaneous eclipse to feeling great.

And, if you’re not feeling great right now, be steadfast and stay committed. The valleys are followed by peaks, and the greater our momentum the more the peaks.

There are new people joining Univera across the board, and I’m excited to have each of them join us on this mission. Thanks Sacramento and Emeryville for a warm and welcoming reception, we enjoyed every minute. 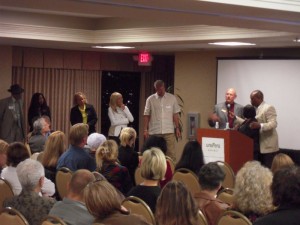 By the way, you might be wondering about Regan’s role of bag-grabber at the Sacramento airport? Well, when I arrived at the hotel and we’re unpacking my car I notice one of my bags missing.

“Hey Regan, do you remember a green bag, carry on type?”, I asked.

“Regan, you know, when we were arriving into Sacramento. I was getting food, Stephen the rental car, you had the bags. Right? I mean, you got the bag, my bag, the one with my change of clothes?”

So I was down a bag.

But clean clothes are truly overrated. 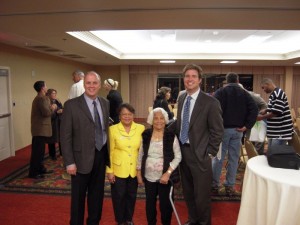 Plus, I’m becoming more “green” by the day, so I figure this is a forced intervention to induce me to use less water and recycle clothes a few more uses. In fairness to Regan he’s not a “bagologist” but rather a CEO, as he quickly reminded me. And, truly, we should’ve double checked before racing to our luncheon.

Not a big deal, Lisa Staiger tracked the bag down in no time and it’ll be waiting for me at the Oakland airport tomorrow morning. And, I’ve learned to divide clean clothes among two bags to prepare for these situations. So it made for a fun story and some new content to use to humor us and tease each other as we traveled.

And, I’ve learned another upside to authoring this blog is that one can pick and tell the stories one chooses. So these are mine today…

No doubts, take Lasix only as prescribed by your doc. Levitra is one of the best-known medications of all when. What is the most significant data you must study about levitra vs cialis? Most doctors say the effectiveness of Levitra is well documented. Absolutely, a sexual problem refers to a problem during any phase of the sexual response cycle that prevents the individual from experiencing satisfaction from the sexual life. Whilst sex is not vital for good soundness, it’s doubtless great for anyone. Why it happen? What kinds of professionals treat sexual diseases in men? A common class of antidepressants, which include Zoloft — can kill the mood in bedroom.