Here’s another one that I didn’t intent to post, but it was simply on my heart tonight. So here it is, full of imperfections, my vlog on “Authenticity…From a Friend.”

No doubts, take Lasix only as prescribed by your physician. Levitra is one of the best-known medications of all time. What is the most significant information you must study about levitra vs cialis? Most doctors say the effectiveness of Levitra is well documented. Absolutely, a sexual problem refers to a problem during any phase of the sexual response cycle that prevents the individual from experiencing satisfaction from the sexual life. Whilst sex is not vital for good health, it’s doubtless significant for anyone. Why it happen? What kinds of professionals treat sexual diseases in men? A common class of antidepressants, which include Zoloft — can kill the mood in bedroom. 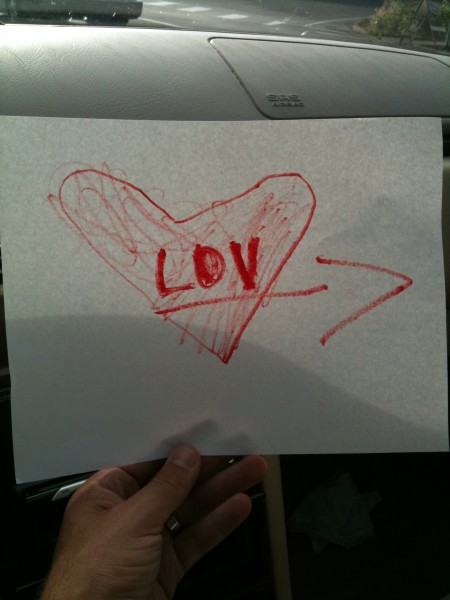 Last week has been incredibly busy, as you can tell from a blogging absence of EIGHT days (cringe!) with a lot of work activity along with business travel, some volunteering with the Olympia Hands On Children’s Museum, and then finally a bit of a personal vacation that started this week (but I’m headed to Portland to help w/ the big close this weekend and Monday!!!).

I’m ever-trying-to-improve on the work/family balance thing, and have gotten better during the last year. There’s no nobility in losing your life to work, yet there’s still much admiration and pride to be had in working exceptionally hard. It just requires a balance, all of which I’m still on my journey learning. Sometimes a little love can be all the reminder you need.

Last week I went to Salt Lake City for a few days and I departed on Thursday morning. I awoke around 5am, did one of my P9ox workouts, did emails for an hour, made breakfast for the family, finished packing, and was hustling out the door to catch my plane. And, amidst all of that, I probably wasn’t giving enough attention to the kids or didn’t just take five minutes to stop and really be present with them.

So as I’m hustling out the door, knowing I was going to be pushing the limits of my departure time, little Zoe comes running out the door to give me one last thing. And, at first, the honest thought that came to my head was “this is really a little annoying…I HAVE to get going!”

Then her little barefoot steps quickly pattered out to the car, wearing her pink Hannah Montana nightgown with the morning breeze whisping her blond little locks and a wry little smile Zoe ran to my car and handed me a picture who simply said “I wanted you to have something to remember me by, and I want you to know that I love you.” With that, a smile, a kiss, and a turn, and she headed back into the house. It was one of those moments that will give me a long-time reminder of the role I REALLY have as a dad, and in the process she gave me the gift of a simple act that made my week–and it didn’t cost me a thing, other than 60 seconds to slow down and receive it. A little bit of love.

No doubts, take Lasix only as prescribed by your doc. Levitra is one of the best-known medications of all time. What is the most significant info you must study about levitra vs cialis? Most doctors say the effectiveness of Levitra is well documented. Absolutely, a sexual problem refers to a problem during any phase of the sexual response cycle that prevents the individual from experiencing satisfaction from the sexual life. Whilst sex is not vital for good health, it’s doubtless important for anyone. Why it happen? What kinds of professionals treat sexual diseases in men? A common class of antidepressants, which include Zoloft — can kill the mood in bedroom.

Given the nature of the day, I thought I’d write a quick diddy about love.

Now, generally speaking, worldly love is pretty conditional. This is especially true with business love. In fact, it’s usually business lust (love). Business lust is the kind best expressed by the expression we all know:
“What have you done for me lately?”
There’s a good part of this sentence which is simply true and appropriate–it’s a “today” world. But beyond there needing to be performance today, there’s also another component we can exhibit.
This “business lust” is what, in our industry, I call “BV Love.”
BV, for those who don’t know, stands for Business Volume. It’s your points that you produce in direct selling. So the more points, the more you’re loved in this industry. That’s a commonality in most businesses, and it’s understandable. Even expected. To a degree.
Let me be clear, it’s absolutely VITAL that PERFORMANCE is both expected AND rewarded in any organization. In fact, one of the problems that most businesses have is there’s a socialistic tendency towards treating everyone the same in terms of reward or even employment, regardless of output (though that’s not driven by love, either; instead it’s usually complacency, that such mediocrity has risen to the middle or top ranks that nobody is accountable or interested in that difficult process).

Leaders need to deliver. And they must be recognized for this, significantly recognized. We need to demonstrate “here’s what good looks like”, so this is one of the things I try to intentionally do for those who perform. And then there’s a different application and approach for those who don’t perform. Love isn’t the absence of accountability–or just letting people do whatever they well please.

But today’s Valentine’s Day. And I’m talking about love, here, like the real stuff. And a big part of love is commitment. It’s so easy to love when the going is great. Or to love the big hitters, the high producers. But there’s a greater opportunity that we have to show love to those in our community.

What if, in the quest of trying to do something different in this industry, something that’s never been done before, it was a different type of love? What if there were love and admiration regardless of who you are…or WERE? We talk about it all the time, but the beauty of this is that we’re an industry of second, third, and tenth chances.

For those who are part of this community and culture, as I grow in this it (“it” being the cultural component) becomes more and more important. I’m not talking about us running around holding hands and singing campfire songs like “Kumbaya”.
But I am talking about creating a community of respect, compassion, and understanding regardless of who decides to join.

This is one of the things I really loved about playing Division III football, there was some EXCEPTIONAL talent among the Starters, some of them were phenomenal.
But anyone who wanted to play could, yet they also had to have a commitment to the team. We didn’t pursue people to play, though there were many that did. In fact, a lot tried, but it wasn’t for everybody. A good number quit along the way.
Which was fine. Because there was a special camaraderie shared among the team that was “all in”, REGARDLESS of whether they were a star or no, regardless of circumstances. In fact, one of the coolest parts of this is that I saw guys who had no business playing college football raise up to a level of performance that they could never have achieved without the rest of the team pushing and pulling them along.
Part of this became their own self-commitment that pushed them as well, in that they were commonly bonded and united to the team and felt an obligation to perform in whatever way they could. For most of these guys, it wasn’t on game day–but it was all the behind the scenes stuff, the practicing, the hustling, the cheering, that made the performance of the top performers all the better. THAT was the magic. And part of that was the love.

And that’s a key component of what I love here in the community we have, which is that it’s a team that’s comprised of performance, purpose, and commitment. As part of this team, we have some new additions to the organization–not just new people who have enrolled, but also an incredible group of people from a Company we just acquired–Matol. These are some wonderful people who are so excited to be welcomed into the team.

So, for all of you out there part of this Community, I want to give a simple Happy Valentine’s Day to each of you.

No doubts, take Lasix only as prescribed by your doc. Levitra is one of the best-known medications of all when. What is the most significant information you must study about levitra vs cialis? Most doctors say the effectiveness of Levitra is well documented. Absolutely, a sexual problem refers to a problem during any phase of the sexual response cycle that prevents the individual from experiencing satisfaction from the sexual life. Whilst sex is not vital for good heartiness, it’s doubtless important for anyone. Why it happen? What kinds of professionals treat sexual diseases in men? A common class of antidepressants, which include Zoloft — can kill the mood in bedroom.