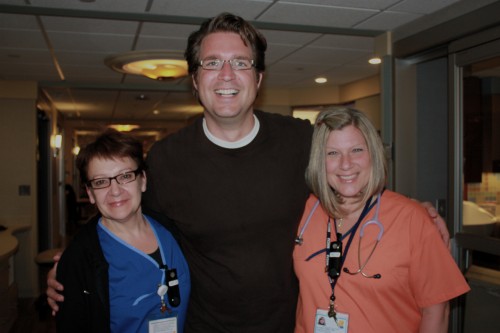 Recently I was visiting some family on the East Coast. Every time I’m in the area, I usually stop by the Hospital where my daughter was born–Royce–just about nine years ago.

As many know, she was born very premature. I’ll skip the details of the story, I’m sure in accumulation or specifically I have a post in here somewhere that details it.

Anyways, lots of long hours in the NICU. Looooong and stressful hours. And as long as they were for us, for the staff there–particularly the nurses–it was a day after after day. Probably without a lot of gratefulness. Likely without tons feedback. And, all too often, seeing a wrenching end to a life just begun that affects families in deep and emotional ways difficult to explain.

So Royce, our oldest, was a perfect product of Morristown Hospital (lots of things contributed, Providence, the Doc’s, modern technology, lots of prayers, and as I’m addressing today, particularly the nurses). So anytime I’m in the area, which is about once a year, I drop off a note thanking whoever from the staff that’s on at that particular time, and generally something like an Ice Cream cake since there’s a Friendly’s right down the street.

Too often I forget about the people who have difficult and often thankless jobs, so maybe this annual pilgrimage to Morristown was my reminder to myself to do a better job of this, as well as to provide a really sincere thanks to some people who transformed our life.

Sometimes I get wrapped up in thinking that for us to make an impact we have to do something exceptional. And, while there are many great illustrations of people doing just that–I think I can find far more from people who do the simple things, consistently, with a lot of heart, and persistence towards excellence.

In my 8+ years of doing these thank-you-drop-by’s, I’ve never once ran into our two Primary nurses from Royce’s stay at the NICU–they just never happened to be on when I was stopping by in the past.

Until this last visit. It was so cool but on my last visit BOTH of her Primary nurses were on duty, Alyssa and Denise were both there that Sunday afternoon when I was making my annual stop. And it brought back a flood of memories to see them both, and a few other emotions. I got some great time with them both, and was reminded about the simple acts of service that can make such a big difference in peoples lives. For us, the big thing was helping ensure some precarious months in the NICU by paying such great attention to Royce. But beyond that, there was a whole level of emotional support they provided as well.

So, today, a shout out of thanks to all the people out there in jobs that don’t get the gratitude that you deserve. Because whether you saved a life, changed a life, or changed a diaper (for someone young or old), you deserve some appreciation–and a reminder, that the stuff you do, even the routine and mundane, can be a game changer for someone else.

You just don’t always know who, or when.