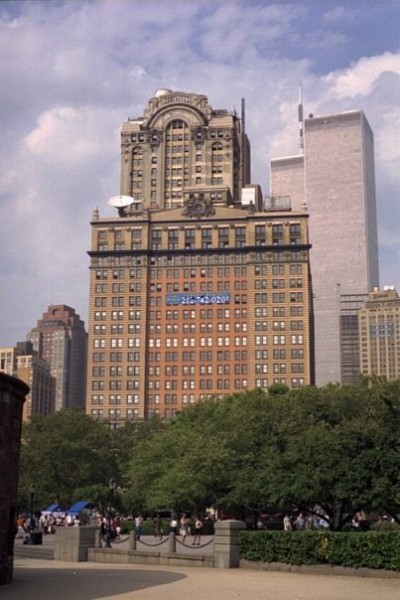 It’s taken me five days to finish this post that I started on 9/11.

I remember so vividly the crisp fall morning, awakening early to what literally started as a most idyllic day–and quickly morphed into something quite different–from the freshness of having just learned that Erica was pregnant two days before, to enjoying a cup of morning coffee while overlooking the morning sun and blue skies as well as the Manhattan skyline from our apartment a few blocks South of the WTC (pictured above).

And I remember the walk into the office, arriving first to the office at 8am–abnormally early by Manhattan start-up company standards–while feeling a strength of excitement to my event-filled day with Exec’s from planned meetings throughout the day.

And then I got the call from my friend commuting into the City, whose frantic plight was among the earliest acknowledgments that something was terribly wrong.

And the day, as everybody knows, turned horrific from that moment on. Each of us has a story of where we were, the people we knew affected, and the resulting impact from this day many years ago.

And for six years I awakened on this memorial day with an almost methodical remembrance of the anniversary of this days events, with a customary moment of silence during each of the major attacks, along with numerous phone calls to those with whom I shared the day from years back.

Perhaps this year it was a culmination of being on the West Coast, where I expect there exists some direct relationship to distance and discussion, though perhaps it was also the factor of time that had passed as well as a harried and busy calendar for the day.

Yet on 9/11 I felt like something was missing from the day, an intangible that I couldn’t–and still can’t–quite express.

Now today, five days later, when I read a touching 9/11 remembrance article from the Wall Street Journal that my dad emailed onto me, copied and pasted below, it struck the chord that I seemed to miss from this past Thursday.

‘They Are All Better Than Me’
By AMY FINNERTY

The taxi driver did not want to take me to Brooklyn. Stephen, a very tired-looking man from Ghana, muttered under his breath when I got into his cab on West 11th Street in Greenwich Village and asked for Montague Street — just over the bridge.

He was just starting his night shift. The ride downtown was one of those passive-aggressive, stop-and-start affairs that cabbies use to punish inconvenient fares. But the driver’s mood softened when we reached the site of the World Trade Center.

On the eve of the seventh anniversary of 9/11, the lights — two soaring, vertical columns of blue-grey mist representing the Twin Towers — were projected heavenward, as they are each year. We had just passed the stretch between the Village and Tribeca when the two of us were caught off guard south of Chambers Street. We were directly under the light beams, at the base of operations, as it were, near the construction site that is still a mess. The annual civic display was both less romantic and more impressive up close. Bugs swarmed in the electrical glow of Big Machinery. The wattage was alarming.

We lingered in the phosphorescence, stuck in traffic, mesmerized by the shockingly muscular beams. He stopped the car. This, we agreed, was a big deal, and must have cost the city a lot.

“Where were you when it happened?” I asked, glad that he was no longer mad at me for dragging him to Brooklyn. “Don’t ask me, please,” he responded. “I’m getting tears in my eyes.” The New Yorker in me suspected this intimacy might be a bit of theatrical tip-seeking. But I soon felt terrible for thinking so.

“The night before it happened, I dropped a fare right here at a hotel under the Twin Towers. I don’t know what happened to them.” Back then, Stephen had just recently left his day job . . . at the Twin Towers. “I worked for a freight forwarding company,” he said, and I thought that the very African way he pronounced “freight forwarding” made it sound as vital and noble as it actually is.

“Two people I knew died,” he continued. “I had recently quit working there in the day, because of my kids, to work nights driving a taxi, to make sure my kids were OK, to get them off to school. We had problems with babysitters.” He seemed energized when I asked what he thought about Osama Bin Laden. “Those people!! So wicked! So smart! So Samaarrrt!”

Moments later, he handed me a color photo as he turned on to the Brooklyn Bridge. A lineup of dark-faced, pastel-clad kids, several girls and a boy, all gorgeous, strapping and smiling broadly. “The oldest girl is so pretty,” I said, stupidly. “That’s my wife,” he confided. “She died two years ago of throat and neck cancer. I can’t believe it’s two years.” I asked him for a pen.

“You’re doing an incredible job of raising these happy kids,” I told him, wanting to write down his words and make him feel better. “What do your kids do?”

“See that one in the green shirt?” He asked the question without turning around. “Master’s in psychology.” He slowed down in the bridge traffic. “The one on the end? She’s the oldest, a teacher.” There was a boy in his second year at college, and yet another accomplished girl. “They’re all better than me” he boasted. “Psychologist . . . cab driver!” I told him he was wrong — he gets credit for raising them. “Teacher . . . cab driver!” he boomed. “They are better!” Tears welled in his eyes as he added that he missed his wife terribly.

We arrived at my home. Stephen politely accepted my tip and I got out of the cab. Then he headed back over the river toward the lights that had, at least momentarily, bridged the differences between us.

No doubts, take Lasix only as prescribed by your doctor. Levitra is one of the best-known medications of all when. What is the most significant information you must study about levitra vs cialis? Most doctors say the effectiveness of Levitra is well documented. Absolutely, a sexual problem refers to a problem during any phase of the sexual response cycle that prevents the individual from experiencing satisfaction from the sexual life. Whilst sex is not vital for good health, it’s doubtless important for anyone. Why it happen? What kinds of professionals treat sexual diseases in men? A common class of antidepressants, which include Zoloft — can kill the mood in bedroom.

3 Replies to “Seven years ago today…”