This is probably one of the most amazing stories I’ve heard in quite some time…Words don’t do justice to it, so if you read the article and like it I’d suggest you also watch the video. What an incredible story of an unexpected gift.

Although Phoenix cab driver Tom Chappell insists he always knows where he’s going, he has been known to miss a turn or two.
Such was the case the day we rode with him, and such was the case a few months ago, the day Tom got called to the home of Rita Van Loenen.
“I was running about 30 minutes late. When I finally did pick her up she was not a happy camper,” said Tom.
“Well, I mean I’m expecting a cab driver to be able to find his way,” said Rita.

Read and watch this story.

No doubts, take Lasix only as prescribed by your doctor. Levitra is one of the best-known medications of all time. What is the most significant information you must study about levitra vs cialis? Most doctors say the effectiveness of Levitra is well documented. Absolutely, a sexual problem refers to a problem during any phase of the sexual response cycle that prevents the individual from experiencing satisfaction from the sexual life. Whilst sex is not vital for good health, it’s doubtless important for anyone. Why it happen? What kinds of professionals treat sexual diseases in men? A common class of antidepressants, which include Zoloft — can kill the mood in bedroom.

Travel can be a lot of fun, albeit in doses. And I certainly prefer personal over business, as a lot of the road wears on you and in many ways that people who donâ€™t have to travel simply do not realize or appreciate. But it can also be very rewarding and the experiences provide so much learning along the way.

An old football coach of mine used to carry the quote by someone (unknown to me) which was â€śYouâ€™ll be the same person ten years from now that you are today except for the people you meet and the books you read.â€ť

So I try to do a lot of reading. And, particularly on trips, I try to make it an intentional point to make the best of each adventure and learn something along the wayâ€”particularly from the people that I meet.

So Iâ€™m checking in around 6am on WorstWest Airlilnes, a carrier that I simply do not like and is generally notorious for poor service. So as Iâ€™m checking in, the two people behind the desk are throwing verbal assaults like left and right hooks at each other. Honestly, I was in shock.

Employees fighting or undermining each other in front of customers is among the childish as well as recklessly irresponsible behaviors. So I try not to be annoyed, I mean I really tried, I smile and manage to squeeze out aÂ  â€śthank youâ€ť as politely as possible despite standing there at the desk for five minutes waiting for these two cranks to quit their bickering, all while cringing to think about the impact this behavior has on customers as well as others in their organization.

We board the flight to Montreal, I actually sleep for a few hours which is quite rare for meâ€”generally I love the cabin time for solitude, writing, and reading. I did read a bit in the book â€śThey Call Me Coachâ€ť by John Wooden, as well as jammed through about seven old Wall Street Journals.Â

Upon arriving weâ€™re probably a half hour late into our transfer city of Minneapolis, but thereâ€™s seven of us on the plane continuing onto Montreal so Iâ€™m certain theyâ€™ll hold the next puddle jumper for us. Certain. 100%. I mean, what idiot wouldn’t hold the gate when 25% of your cabin (remember, puddle jumper) isn’t there but only a few minutes away. Right?Â

We run to the gate, only to find the doors are closed. One person made it, from row 19 on our first leg. We, unfortunately, were in rows 35 and above. So, yes, the back of the plane is safer. It is also slower. I prefer the “crazy and reckless” front of the plane to that of the “safe-and-cozy-in-the-event-of-a-????” in the back of the plane.Â

Then, knowing that six more were right behind them, they closed the door. So the group of us sat there for ten minutes, all the while the plane is sitting there as well, with a group of gate attendants full of â€śI canâ€™tâ€ť (umm, actually you could but you donâ€™t want to), â€śNoâ€ť (Why say yes, when your culture makes it feel so good to say no?) and â€śWell what do you want me to do?â€ť (Ah, yeah, well, just do your job and help me out hereâ€¦And maybe a smile would be nice as a kicker).

The two of them had about the level of service, empathy, and desire to try to help as much as a door knob. Really, it was unbelieveable. I really tried to give them the benefit of the doubt, and perhaps these are really at the heart of the matter good people having a bad day. But, then again, it’s likely they’re a product of the environment and culture theyâ€™ve created.

Suddenly, like a little angel fluttering her way through the terminal wearing red and white, a bubbly woman by from another gate to offer to help us over in her little area, a totally different culture. In fact, RGL (Rude Gate Lady) actually tried to stop NGL (Nice Gate Lady) from taking us over to her little section. RGL actually had us rebooked on a flight that got us into our final destination by about 11pm, with two more flight legs to go. And all the while, she was doing us SUCH a favor and it was SUCH a burden to get us on our way.

A little jacked with such bad service, we followed the NGL just with the hunch that someone who smiles and actually offered to help us simply MUST have some better outcomes for usâ€”and if not, at least sheâ€™d be nice to work with.

When we walked over to her gate, it was a totally different experience. Apologies for the delay. Empathy. Solutions-orientations. It was as simple as â€śHey guys, looks like a long day. Iâ€™m sorry. Letâ€™s find some solutions to get you outta here into your final destination, and I think I might find some better options that what you currently have that can get you in a few hours earlier.â€ť

No surprise, she found seats on a flight that got us in earlierâ€”three hours earlierâ€”but more so did it in a way that made the group of us feel better.

And, I expect, her as well.Â

No doubts, take Lasix only as prescribed by your doctor. Levitra is one of the best-known medications of all time. What is the most significant data you must study about levitra vs cialis? Most doctors say the effectiveness of Levitra is well documented. Absolutely, a sexual problem refers to a problem during any phase of the sexual response cycle that prevents the individual from experiencing satisfaction from the sexual life. Whilst sex is not vital for good health, it’s doubtless significant for anyone. Why it happen? What kinds of professionals treat sexual diseases in men? A common class of antidepressants, which include Zoloft — can kill the mood in bedroom.

Over the past year I’ve found meaning in finding a cause.

Work is meaningful, and in fact I genuinely ENJOY work. I doubt I will ever retire–though I’m sure if you’re a bit more “experienced” in life you’re thinking “well that’s easy to say at 35 years old”, right?

Work is a real blessing, and I have always felt that way. Probably more of us feel that way now than a few years ago.

But I’ve also become convinced that work shouldn’t be our only cause. Your spirituality, of course, is important. Politics are important (side note: my blog is mostly apolitical and areligious yet it’s hard to separate fully personal beliefs from life’s experiences and ones writings). Family and friends are important. And sometimes it hardly seems time to do these things well, let alone add one more to the mix.Â

This year, more Â so than I have in the past ten years, I’ve concluded volunteerism is important as well. Maybe beyond important–maybe it’s our duty, or a calling as a citizen.

I think JFK during his inaugurationÂ (obviously this was pre-womb for me, so I live vicariously through reading about this) provided timeless and truthful words encouraging that Americans need be ACTIVE citizens.Â

So after feeling pulled and compelled in this direction, by both desire and duty, about 18-months ago I began looking into various volunteer activities locally where I could spend consistent time working on a set of projects and initiatives that I believed in–and would help the community. So I found a cause where I thought I could make an impact, and also something in which I believed in: The Hands On Children’s Museum in Olympia (HOCM).

So for the past year I have had the privilege to work on the Board of Directors at the HOCM locally. I don’tÂ write about this to be self-promoting in any way, if anything I’m a little embarrassed that I haven’t done more volunteering over the past ten years of my life, especially compared to the amount of time I’ve “wasted” on things way less important. Instead, I write about it because the experience has given me new insight and meaning. Beyond what I hope is a positive impact to my community and to an organization that focuses on childhood development, here are a few of the great experiences that being involved have provided. 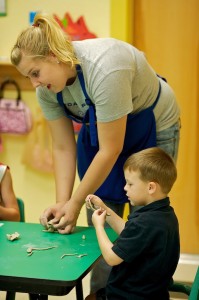 1. Perspective. When you’re consumed by work, then it seems at times that work is all that matters. When you get engaged in something else, perspective changes. And sometimes that different perspective comes back and helps out in other areas as well.Â

2. Collaboration. This might strike you as odd, I get a chance to collaborate a lot at work internally and with all our field partners. Yet, I’ve never felt the same invigorating feeling of collaborating with a bunch of people on a project for which they were paid nothing. In fact, recently we were working on a marketing plan for the HOCM and the 90-minutes were among the most enjoyable I’ve had in a team dialogue. Motive, totally pure. No politics. No posturing. No ego. Just an intense desire to passionately do what was right for the HOCM, community, and the kids. Not to say these dialogues can’t and don’t happen in a work environment, but as many of you know, it’s just different when you’re doing it philanthropically versus for money.Â

3. Fulfillment. I’m not one to suggest finding your highest fulfillment in things or activities, but I do think there’s something fulfilling about being a productive member of society. Whether you’re getting paid to do it or not. In fact, maybe we’re more productive to society when it’s unpaid.Â

I’m curious to hear your activities and some of the projects that you participate within, locally or nationally,Â occasionallyÂ or often, and to hear of some of the experiences it’s provided you.

No doubts, take Lasix only as prescribed by your doctor. Levitra is one of the best-known medications of all time. What is the most significant info you must study about levitra vs cialis? Most doctors say the effectiveness of Levitra is well documented. Absolutely, a sexual problem refers to a problem during any phase of the sexual response cycle that prevents the individual from experiencing satisfaction from the sexual life. Whilst sex is not vital for good soundness, it’s doubtless great for anyone. Why it happen? What kinds of professionals treat sexual diseases in men? A common class of antidepressants, which include Zoloft — can kill the mood in bedroom.