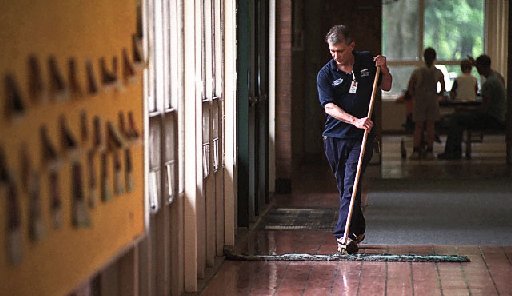 And I’d move the trash can from where it was, to a location by the door. Which was just as convenient for those who didn’t use my method, and it would offer a receptacle for those who use the “towel on door” methodology.

But it kept moving back to its old location. Frustrated, I finally would just throw my paper towel down by the door once I opened it up and headed back to my office. Someone else would clean it up at the end of the day, I figured. I didn’t really think it through that blatantly, I just didn’t want to get germinated, and I couldn’t keep moving the trash bin. So I did this “right by the door paper towel toss on the floor” for 2-3 days.

Then one night I was leaving the office around 10pm. I was tired. Frustrated. Annoyed. Work, which overall goes really well and I genuinely am passionate about, had been particularly difficult that day. And I was sluffing out the door muttering to myself something about how hard my job was, the challenges of life in a raw start-up company, how difficult it is to be a CEO, and blah blah blah.

Translation: I was whining to myself.

Which I don’t think I do very often, but it had captured me as I was locking up the door.

And as I’m turning around I hear a little girls voice. I thought I was mistaken, it was after 10pm on a weeknight. But, sure enough, I saw a little girl–maybe 6 or 7 years old–running after her dad down the hallway. Her dad, as it turned out, was the janitor for the building–a hardworking immigrant, always cheerful and exceptionally fastidious. It was obvious as he was just finished cleaning the men’s room. The same one where I’d been casually throwing my door-opening-paper-towel-pieces by the door for a few days.

Suddenly a wave of my absurdity was cast over me. Not just for the extra trash I was leaving for this guy, but for how I was feeling about myself as I leaving the office. Here I was, fortunate in 500 different ways. Whilst making his job more difficult through my selfish little trash deposits. And here he was, I’m sure also in some ways very fortunate, but also going through the challenges of life cleaning buildings on the second shift. With his young daughter in tow.

I then realized, my job is easy. And isn’t particularly admirable.

His job, however. Now, that’s admirable.

And I’ll never, again, throw a piece of paper towel by the door.

No doubts, take Lasix only as prescribed by your doc. Levitra is one of the best-known medications of all when. What is the most significant info you must study about levitra vs cialis? Most doctors say the effectiveness of Levitra is well documented. Absolutely, a sexual problem refers to a problem during any phase of the sexual response cycle that prevents the individual from experiencing satisfaction from the sexual life. Whilst sex is not vital for good health, it’s doubtless important for anyone. Why it happen? What kinds of professionals treat sexual diseases in men? A common class of antidepressants, which include Zoloft — can kill the mood in bedroom.

4 Replies to “My Trash, My Selfishness”