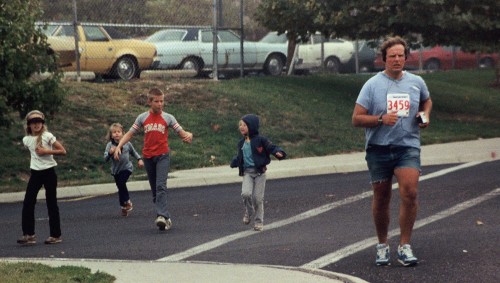 Though late in the day, I’m still going to get my Father’s Day post in before “COB”, even beating midnight Eastern time.

My Dad is a phenomenal individual and I really appreciate him (as well my Mom, but today is the Dad’s day) more than words can adequately express. Which might be a good thing, because this week is Convention where a lot of Univera associates from all over North America will descend upon Seattle for a three day event and I am burning time fast, with still much to do this evening. A quick stop at the house for dinner and then back to crank until well into the night, along with a lot of my colleagues who are doing the same thing, to finalize preparations for our annual Convention.

So as I was thinking about a Father’s Day post, and whether to even do one. As I was driving home from working offsite I thought I could share on a lesson I learned from my Dad that I reapplied yesterday during my Saturday run.

The lesson is a simple one: your body lies to you.

He used to tell me this when we’d go running, I remember heading out with him on the weekends at a young age (possibly late elementary school, or was I a bit older?) we’d go out for anywhere from 3-7 miles around the neighborhood. Every run seemed to start the same. The first half mile I’d feel lousy, and I’d tell my Dad and whimper something like “this is hard” or “I don’t feel good” or “my legs are tired, let’s turn around!”

And he’d just look at me and say “your body lies to you”, and would continue with “give it some time and you’ll see what I mean.” So we’d go a bit further. Another half mile and I wasn’t feeling good, but by then I wasn’t feeling so bad either. By the second and third mile I generally felt pretty good. Sometimes great. But, almost always, at least pretty good.

Now, I’m sure someone is reading this right now and thinking “Well, this is blasphemy! You should listen to your body!”

Indeed, sometimes you should.

But I’m not talking about putting my hand in front of a blowtorch and sloughing it off as mind over matter whilst forging forward; instead I’m speaking about the lesson I learned as it relates to being steadfast and doing some of the things you don’t naturally feel like, or want, to do.

Which, for me, quite often, includes working out.

In fact, I think that’s true for most people in that our bodies, and minds to some degree of course, don’t “want” to work out. If you doubt it then consider for a moment why we don’t, instead, have an epidemic of lean, skinny, mile-eating, resting-pulse-rate-of-50, hyper-fit men and women across North America?

After I work out I am always glad I did it. Without exception. I might not always feel physically good afterwards (though, again, usually I do by the time I’m finished). But I’m always glad I invested in doing something good for my health. Over the past ten years I’ve gone up and down with my wellness initiatives, and getting back on the horse is always hard. Staying on is hard, too.Â

My body resists, instead it THINKS it wants to sit on the couch, or get a bit more sleep, or eat the Cherry Garcia ice cream in the fridge…along with a few thin mints (thank you, Girl Scouts). So sometimes I have to force myself to get going, and simply realize that, at times, my body lies to me.

So now that I’m in a rhythm of working out and preparing for the Portland Marathon in the fall it’s a bit easier because I’ve got to follow a regimented schedule, and now at this point I look forward to more workouts than those I don’t. During the weekends I usually do my long run for the week, and the longest I’ve done so far is 16 miles. In contract, yesterday’s run should’ve been a breeze, it was only five miles and the pace was moderate.

But there are still occasional days, like yesterday, when I felt as if someone were beating me with a billy club with every stride. And in the last two months that I’ve been diligent about running on my regimen I’ve never once considered ending one of my runs prematurely–until yesterday.

Mile number two, I felt terrible, and I was going to bag it.

Then, as I was running (struggling) I remembered, out of nowhere, the lesson from so many years ago where my dad would turn to me and remind me “your body lies to you, give it some time.”

And by the end of the fifth mile I realized that, once again, he was right.

Thanks, Dad, for all the great memories and lessons you’ve taught me over the years. Including one that I used, completely unexpectedly, yesterday during my run.

No doubts, take Lasix only as prescribed by your doc. Levitra is one of the best-known medications of all period. What is the most significant info you must study about levitra vs cialis? Most doctors say the effectiveness of Levitra is well documented. Absolutely, a sexual problem refers to a problem during any phase of the sexual response cycle that prevents the individual from experiencing satisfaction from the sexual life. Whilst sex is not vital for good health, it’s doubtless significant for anyone. Why it happen? What kinds of professionals treat sexual diseases in men? A common class of antidepressants, which include Zoloft — can kill the mood in bedroom.